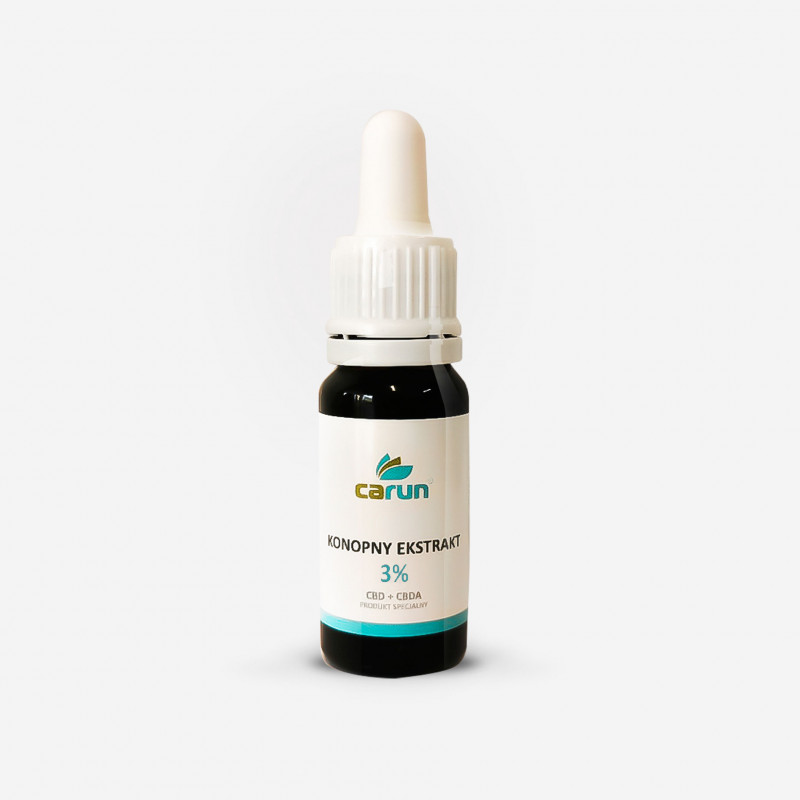 CBD 3% Carun extract is made from sativa hemp grown in virgin nature in a protected area without the use of pesticides or herbicides.

Our extraction system uses CO² technology to process cannabis in a gentle natural way, without solvents and additives. In Carun hemp oil, you'll only find natural cannabinoids that respect the original content and composition of these substances in the hemp plant. This maintains the highest possible synergy of cannabinoids. This synergy plays an important role in the quality and effectiveness of this rare substance and ensures the highest degree of positive effect.

Application and dosage: 1 drop once a day (in accordance with EU regulations)

At least 30 minutes before a meal. Drop under the tongue, wait 60 seconds, and then swallow. You can drink with water.

It does not replace a varied diet.

Shake well before use. Protect from sunlight, heat and moisture. Keep out of reach of children. Not suitable for pregnant and lactating women.

* In November 2015, the European Parliament and the Commission of the European Union adopted the new NOVEL FOODS regulation, Regulation (EU) 2015/2283, to improve the authorization process for novel foods, while ensuring high standards of food safety for consumers. These provisions entered into force on 1 January 2018. Pursuant to this Regulation, all dietary supplements containing cannabinoids must be registered in accordance with the European procedure as novel foods. An application for authorization of existing food supplements subject to novel food regulations had to be submitted to the European Commission before January 1, 2019, to predict the annual period during which existing cannabinoid-containing products may remain on the European Union market.


CBD history and information about the world

on the properties and use of CBD

It wasn't until the second half of the 20th century that a revolution in research into the healing properties of cannabis came about. In 1964, he discovered THC, responsible for the psychoactive properties of marijuana. However, the attention of scientists from around the world is caught by the second main cannabinoid of the performance - CBD. Intensively researched around the world for possible healing activities.

CBD, or cannabidiol, is a non-psychoactive ingredient in marijuana. CBD is most common in Cannabis Sativa. It does not cause addiction, and as indicated in the medical journal Addictive Behaviors, it can help treat some addictions. (Research into the treatment of many addictions is underway).

It is an anti-inflammatory substance and is involved in the fight against free radicals, which may in the future become a potential cure for inflammatory diseases, according to the authors of the publication in Free Radical Biology and Medicine. CBD is considered an extremely safe substance - its overdose is practically impossible.

There is an extraordinary story behind the discovery of the healing properties of CBD in epilepsy in the US. Charlotte Figi, the first girl who returned to a normal life with hemp oil, suffered over 300 seizures the day before CBD treatment. When doctors and physiotherapists spread their hands, her parents decided to take the initiative.

They found information on the treatment of drug-resistant cannabis epilepsy. As the mother emphasizes - the decision to use CBD extract in a child was not easy.

However, after the start of therapy, her condition began to improve quickly, and today the girl takes only cannabidiol ... and is like any other child. Today, in her honor, the drug manufacturers she took called him "Charlotte's Web." Her case described in epilepsy became the inspiration for the development of Epidiolex by GW Pharmaceuticals, and preliminary clinical studies showed its significant effectiveness in drug-resistant childhood epilepsy.

Preclinical research in the US suggests that CBD may be a modern anti-cancer drug with a high safety profile. According to the results of numerous studies reviewed by Italian scientists, this cannabinoid inhibits the formation of new vessels that nourish the tumor and causes its cell death - while remaining harmless to healthy people. Preliminary reports suggest that this may help combat:

Classic drugs used in schizophrenia are associated with numerous side effects. Even the most modern of them cause diabetes, movement disorders and even fatal arrhythmias. Cannabidiol seems to be deprived of them, moreover - in some cases schizophrenia has proved to be very effective.

In addition, CBD reduces anxiety and anxiety. Studies in mice also suggest its antidepressant effects, according to the prestigious British Journal of Pharmacology. CBD is also a protective agent for nerve cells.

Therefore, teams of scientists from around the world are conducting research into its potential role in the treatment of Alzheimer's disease, Parkinson's disease, dementia and compensatory diseases, i.e. considered incurable Creutzfeldt-Jacob disease.

The development of many diseases, including autoimmune diseases, is associated with chronic inflammation. This leads to the destruction of the joints in rheumatoid arthritis, intestinal walls in Crohn's disease and ulcerative colitis, as well as thyroid cells in Hashimoto's disease or Graves's disease.

Although there are no clinical trials to date, preliminary reports suggest that CBD may reduce the symptoms of inflammatory bowel disease, according to the authors of Phytotherapy Research, as well as the progression of multiple sclerosis.

CBD extract is a completely legal oil made from hemp. It is obtained from special varieties of the Cannabis sativa plant, with a high content of cannabidiol. It has no psychoactive effect, therefore it is not considered a narcotic substance.

The use of CBD in treatment in Poland

According to the information held by Carun Farmacja Polska Sp. Zoo. the medicinal product containing cannabidiol CBD is authorized on the territory of the Republic of Poland.

Research into the therapeutic properties of CBD is underway.